Photo images of bones are traditionally made with the use of x-rays – those magic and lethal rays which travel through the body and organs only to be stopped by the density of our bones. These images tell the medical profession what goes on – or what has gone wrong – with specific parts of our body.

But x-ray machines are not for artists.

So how do other professions capture the bones? Well – I borrowed a life sized skeleton from a friend in Cambridge. And so began the artistic explorations of our relationship with the hip bone.

Seymore the skeleton is not a real person. He is a composite of many people and made in some sort of plastic. And he is brutally bolted together with metal bolts and screws.

But for a brief period in 2010 he was a welcome visitor at my home office. 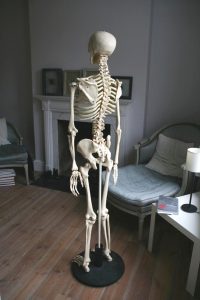 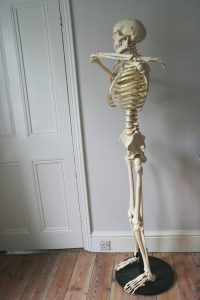 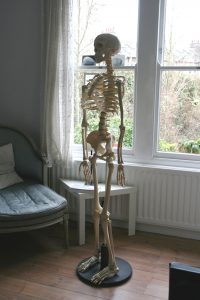 During his stay he became one of the most photographed skeletons in Cambridge. But strip away the domestic surroundings and you have something that is akin to an x-ray. And that is exactly what I did in order to make templates for my x-ray glass pieces. Seymore transitioned from a “person” to a 2D image – his walk through my office brutally terminated.

For my work I also wanted to make a collection of hip bones in glass and ceramics. Bones which would be personalised through the use of colour – bones which spoke about our changing relationship with the body – about repair and reconstruction.

But in order to make work about reconstruction I first had to deconstruct. And again Seymore was as obliging as ever. He readily let me unscrew one of his hipbones and his dismantled “body” waited patiently while I made multiple casts of some of his bones. These casts became the templates for reconstructed bones made in glass and porcelain. 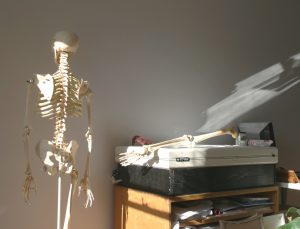 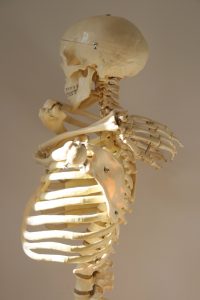 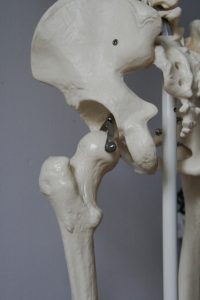 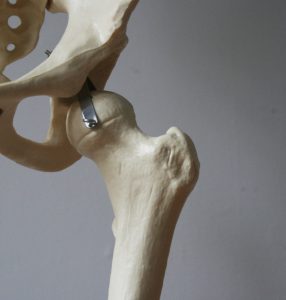 Seymore is now back home with my friend who lent him to me. While he was with me he was scrutinised in the most intimate ways – for the purpose of creating intimate work.

My small collection on reconstruction, based on my visitor, won the Lankelly Chase Glass prize in 2010.