In 2015 I began an experimental collaboration with a Cambridge based ceramicist – Rachel Dormer. The intention was to develop new work in response to an unfamiliar object.

Rachel lent me an unusual object – which on further examination turned out to be an insect cage. However, prior to knowing what the object was for, I responded to the family history attached to the object – and made scrolls containing imagined messages from the past. These were inserted into small ceramic structures which resembled remnants of the past.

But on discovering the actual purpose of the object – to keep crickets in an insect cage – my explorations took an altogether different turn. For the knowledge gained of the actual use of the object stimulated work on entrapment – essentially exploring the cage from the perspective of the insect. The subsequent kiln formed pieces take on the colour of royalty as well as dripping honey. They explore entrapment, shape and form, colour and meaning. Dead insects appear alongside the pieces.

As a collection the pieces function as multiple interpretations of the original object – each one offering a different meaning – depending on interpretation and perspective. 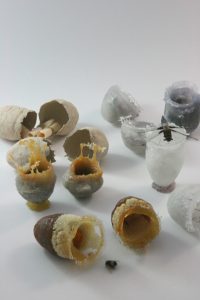 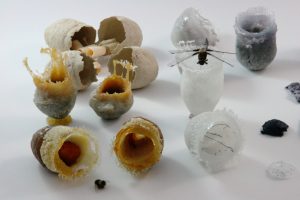